Just a peek! The totes are on top of a dresser. And that’s full too. There’s 2 more bookshelves, the floor-OMG! There’s even a circular saw… you get the idea. 0.o

Friends and Confidantes, {and LIZ!} What is the ONE ROOM that’s the thorn in your paw? –Grandma Auburn **Office packing WILL begin tonight, for sure. *||*Free Shipping is still available before Halloween in my stores:  >Grandma’s Holiday Store< CODE: FALLFORALL Thanks for looking! #halloween #hoodies #christmasdesigns

The Home Inspection revealed more than we bargained for.  Since y’all have been following our saga thus far- I won’t keep you in suspense… We are backing out of the deal with this particular property.  It was so sad for Hubby and I to come to this decision over the last few days. 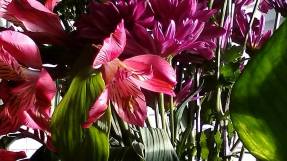 Now, if you’ve never went through this process; 9 out of 10 times you cannot back out at this junction in the game. UNLESS the inspection has pointed out grave issues with the structure.

For one, the water wasn’t turned on, so in that respect we couldn’t have the plumbing inspected (and because of that my Realtor will be asking for our money back from the seller.)  The report included: nail holes in the roof and subsequent water damage where some rafters had already been sister-studded, some knob and tube wiring (which may or may not be functional, but will negate a homeowner’s ins policy), and live hot wires not capped. But the worst of it was pylons continuing to sink in the basement with moisture all over. Plus the back half of the house has settled one direction and the front has settled another. Yikes!

Friends and Confidantes, when your inspection guy mentions the movie “The Money Pit” read between the lines.  “We got weak trees!” Tom Hanks  Gma Auburn {Jen}

Yesterday, Nosey Rosey and I collided heads. She was running to jump on the couch. I was bending to pick up a dog toy. She smashed into my glasses. Thank Goddess they didn’t break. She’s alright. I’m sore and bruised.

The Loan Officer scolded me! One of those ‘manly men’ -he is. Asshole. Tuesday he talked fast and loud- verbally runnin’ me over. So I spent a sleepless night; then got up and called the other loan guy in the same office. I gave him an earful about the rude one. Unsurprisingly, he understood my angst. (I wasn’t the first he’s done that to) And answered my questions in a professional manner.

Today is the home inspection! I shopped around and saved $105. Score! Hopefully I’ll post a few more pre-renovation pics tomorrow. Maybe even a video.

It takes a village: In extended family news, my daughter has acquired a 3rd son for the school year.  But my granddaughter didn’t make the cut off for Kindergarten, so she’s gonna be home-schooled.  3 (step) boys and 1 girl in total. Yeesh!

On the work-at-home front nothing much has gotten done. We’re living on potatoes and chicken a hundred different ways. The cookbook, micro jobs and merch designing are at a standstill.  Carving out some serious hours this weekend to get back on track.

Well Friends and Confidantes I gotta hop in the shower. Hubby is coming home early. Not as frazzled as I was a few days ago. Attitude today: Anything can happen.

What day is it anyhow?  Well, I’ll tell ya… yesterday when I said I felt like I was 3 days behind and missing something?? YUP- It’s the day I find financial documents the loan guy sent on the 24th. {in my spam folder} The deadline is today. Good Grief.

And now I’m waiting on a call-back for questions. Have I mentioned yet how much I hate numbers, math, and figurin’? There’s 13 documents! I read them twice. My brain is seizing. A few things aren’t right, but articulating them in a coherent way… Pffft.  Be worried. I am.

My tiny Trailer is tore up! About half of each room is packed; the floor is trashed. The dog doesn’t fit in the living room anymore. The wagon train of stacked boxes is snaking its way to the kitchen…

Friends and Confidantes, deep breath! Repeat after me, “I will ask all the questions, even if they sound dumb.”  Gma Auburn {Jen}

Twenty days -more or less- until closing! We’ve handed over the earnest money. Now I’m ticking off the remaining TO DO list ASAP:

You know that feeling like you’re 3 days behind and still missing something?? Meanwhile, boxes are stacking up in my hallway.

AND on Amazon Below

“The writer operates at a peculiar crossroads where time and place and eternity somehow meet. His problem is to find that location.”  –Flannery O’Connor

“In the afterlife- I don’t know if I’ll get to see the people I knew… but I sure hope I get to go where all my good dogs went.” -Gma Auburn